Exactly one year ago, on March 11, 2021, President Biden signed the $2 trillion so-called “American Rescue Plan” into law. One year later, Americans feel anything but “rescued” as prices have spiked to their highest in forty years, a shortage in workers has exacerbated the supply chain crisis, and gas prices have now surpassed $4 a gallon.

Ways and Means Committee member and House Budget Committee Republican Leader Rep. Jason Smith (R-MO) released a fact sheet highlighting the consequences to the American economy after one year of the American Rescue Plan being signed into law.

“After a full year of dealing with the disastrous consequences of President Biden’s so-called ‘American Rescue Plan,’ the American people can clearly see that Democrats used COVID-19 as an excuse to pass a $2 trillion wish list to further their far-left agenda. Less than 9 percent of the spending went to combating the virus, while billions were siphoned away from testing and vaccines to spend on housing illegal immigrants at the border. The President’s law eliminated work requirements and expanded incentives that kept workers sidelined, paralyzing supply chains. The explosion in federal spending that Washington Democrats rammed through Congress left a massive trail of waste that has sent prices soaring, with inflation now at 7.9 percent over last year, robbing families of their hard-earned wages. Americans are worse off today than before Washington Democrats rammed their reckless spending bill through Congress and unleashed these crises on the country. If President Biden won’t heed Republican warnings about the inflationary impact of his spending, perhaps he will listen to the tens of millions of Americans living under the crushing burden of the highest spike in prices in forty years,” said House Budget Committee Republican Leader Jason Smith.

Last year, Washington Democrats hijacked the reconciliation process to pass the President’s so-called American Rescue Plan. The bill was passed out of the House Budget Committee on a party line vote in February. During the broader committee markup process, House Democrats rejected over 99 percent of the 229 amendments offered by House Republicans that would have reversed the destructive policies in their partisan spending bill.

Polling now shows the American people see just how badly the Democrats’ bill has failed to deliver. According to a recent poll, only 21 percent of voters believe the law has helped them, while 29 percent say it has left them worse off. Overall, less than 40 percent of Americans now support President Biden’s handling of the pandemic.

The Biden Administration has wasted and mismanaged — or encouraged others to waste and mismanage — much of the money in this bill, which included a $500 billion bailout to state and local governments:

The Biden Administration even diverted $2 billion of public health money to house the surge of illegal immigrants at the southern border as a result of the President’s weakened border policies:

Democrats promised the bill would create 4 million jobs, and President Biden during his State of the Union Address touted that the Biden Bailout Bill created “lots of jobs.” However, a recent study found that the bill failed to create a single one of those promised jobs. It’s no surprise, given the bill put $400 billion towards policies that encouraged people to stay out of the workforce: 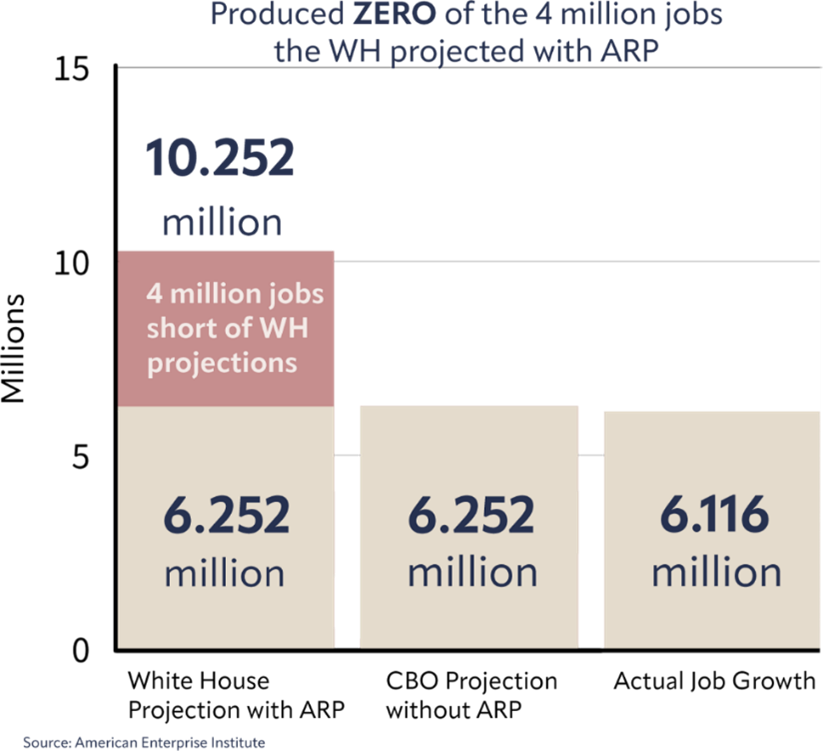 Even before the bill passed, Democrats were warned this law would fuel inflation. Former Obama economic advisor Larry Summers warned it would cause “inflationary pressures of a kind we have not seen in a generation.” He was right. The San Francisco Bank of the Federal Reserve found the law helped ignite the highest inflation in 40 years.

Smith: Stuck Labor Force Reveals False Advertising by the Biden Administration on the State of the American Economy